skip to main | skip to sidebar

Not been on here for ages! Anyone still looking there have been a few more updates.

After messing about with the Megasquirt I took the plunge and off it came to be replaced by an Omex 600. Along with GSXR throttle bodies on a ST170 plastic manifold the car was transformed.

A mapping session has raised the power to 178bhp which I'm more than happy with for now. I think some attention t the gearbox ratios would make the most of it.

A slight mishap with a kerb has also seen the wheels changed and there's now a set of 13's on with 888 rubber.

Also fitted a full cage and some nice mirrors to make it look a lot better, the cage helps keep the cover up as well....
Posted by Steve R at 20:18 No comments:

Its running on the MS as we speak, it starts, idles, revs and picks up OK. Some hesitation at certain revs and doesn't like to run when its cold. Need some high speed runs to get further up the map. A track day may be needed.

Went to the All Ford Meet at Scotch Corner last weekend and lost the speedo magnet off the prop n the way back... repairs needed and its a fiddly job getting the centre tunnel off:-(
Posted by Steve R at 14:31 36 comments:

Megasquirt is installed, wired up working, but way to go with getting the tune right. Although it started first turn of the key its running rich and I'm learning the ins and outs of Megasquirt.

In the meantime heres a video of the event...

Over the winter I've been doing some mods to the car. Mainly the installation of fuel injection using CBR1000RR throttle bodies and an ecu called Megasquirt. The Megasquirt is a diy educational bit of kit that allows you to learn all about efi. There are tons of resources on the internet to support you and I bought a fully biult tested unit with a base map loaded.

So far I have had the motor out for a bit paint and tart up, and I've installed the aluminium bellhousing saving a few kilo's in the process. The Megasquirt is installed and wired up, its alos talking to my laptop so things are looking up. All I need to do now is understand the startup and idle setting s and I should be good to try it.... stay tuned... I hope to have it running in the next couple days and wil post a video as and when it happens.

Nice cam cover with new gasket rubbers and a nice coat of paint....

I've installed an engine steady bar to stop it swinging around in the corners...

CBR TB's with ST170 fuel rail injecting into the ports at the front of the manifold. CBR injectors are not connected at the moment....

Not been on for a while, nothing been happening apart from wiring up the Megasquirt. Once I'm ready to start it I'll post soem pics and a video.

Meanwhile heres a nice knob I knocked up earlier.... 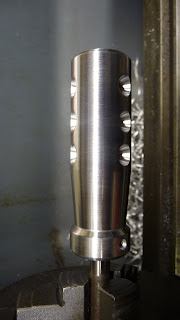 New ali bellhousing as well, not sure whether to paint or polish atm..
Posted by Steve R at 20:52 3 comments:

Today I've spent all day in the garage, never even noticed how cold it was till I've just come out to see the lawn covered in frost! Brrrrr... I've lifted the motor out this morning after disconnecting everything, trailer has gone so I have tons more room to move about, with the car directly under the winch out it came.

Not wanting to remove the clutch as I want to see how the ali bellhousing fits I attached the engine right hand stand to the side of the block. trying the bell housing on I could see it was touching the starter ring on the flywheel so out came the carbide grinder and a little bit of fettling later, nothing touching.

Cleaned the left hand side of the engine which is quite corroded for a 2002 motor. It was the front in the Focus so someone may have had a modified body kit that let a lot of crap into the bay. It certainly is a lot worse condition than the 1.8 I had before. Cleaned it with a circular wire brush in the drill ready for a coat of engine enamel.. sprayed the sump with some HT matt black I had lying around to tidy it up.

I've also remade the idler mount at the front which previously used the pas pump bracket which was very bulky and a bit over the top. With the hacksaw and welder the bracket is now much slimmer! I've put the front engine mount cover back on to keep any nasty stones off the cam belt and used that to mount the idler bracket. Just needs a bit paint.

With the motor up on the stand I can see where the oil is coming from, there is a big leak at the back that will be OK to brass back over and although I though the plug was leaking it doesn't appear to be, maybe when its hot? Anyway, new plug and seal should sort that.
Posted by Steve R at 20:49 No comments:

While I've enjoyed driving the car this year to various meets and shows and I've been slowly upgrading the brakes and transmission etc time has come for a bigger step. Changing from carbs to EFI.

One All Ford show to attend this Sunday then the engine is coming out for a tart up. With it out I'm going to be painting the block and sorting the oil leak from the sump. Hopefully its the drain plug as I checked it after welding by filling with oil and leaving overnight....

Installation of the aluminum bellhousing at the same time as I've figured out how to modify the type 9 clutch arm and pushrod system to replace the clutch cable.

Heres some pics of my new EFI setup. I've spent weeks whittling this from a lump of steel and have faithfully recreated the port injection position from the original ST manifold and the front set of injectors are from the ST170 engine.

ATM I intend to use the ST injectors as they came with the engine so should suit it across the rev range, if not, I can configure the extra 4 on the TB's to give more when needed...
Posted by Steve R at 18:53 No comments:

New brake master cylinders fitted tonight. Gone is the remote reservoir and hopefully thats the end of the fluid leaks I've had since starting the build! New front brake pipe to the front union so I can put the brake light switch on the side and maybe it'll work.

I've trimmed the pushrods on the cylinders to get the pedal back in line with the clutch. The brake pedal has always 'hung' forward to far for my liking. 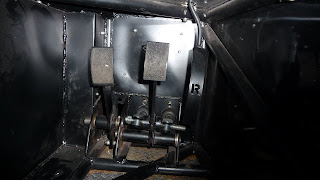 New LSD in, lobro's on with a bit of machining to the spindles to get rid of the ABS teeth and my brand new set of massive 10" drums under the back wheels. 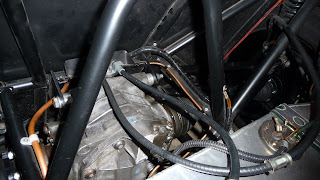 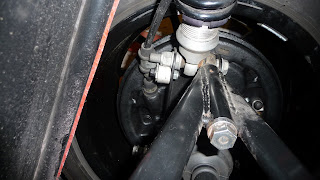 Brakes need fluid and bleeding and maybe some bias adjusting. If it keeps dry I'll go find a road somewhere for some brake testing!

After the recent event where the bonnet flew off I'm going through a few upgrades.

First up got an lsd diff out of a 92 dohc Sierra and have fitted that in place of the open 3.62. The lsd is 3.92 so some recalibration of the speedo will be required, nothing major as its simply inputting a different factor. New diff is bolt on lobro's as opposed to the push in items I had on before.

Lobro's and shafts have been derusted, treated to zinc primer and black top coat. Drive flanges and bearing carriers have had new bearings and seals installed and I've used the opportunity to fit the 10" drums I've had lying around for a while. Local motor factor had all the bits new for the drums so was fairly painless. Had to space out the handbrake cable clamp as the entry into the back plate was a good distance further out than the 7" ones I took off.

Next step is new brake master cylinders. I have some integral units to replace the remote reservoir as they still leak and chuck fluid onto the chassis. Not good. As the backs need bleeding down now anyway it should be a straight forward task. if a little messy, but hopefully no more fluid leaks!

While I have the tunnel off fitting the diff I'm going to be running a new fuel pipe as I need a return after deciding I'm defiantly going the EFI route. I have nearly finished fabricating a new inlet manifold to accept the 43mm Honda TB's I have and have welded in bosses at the port head to use the original ST170 fuel rail and injectors. Management will be Megasquirt as I fancy learning the system thoroughly....

I have a new bonnet sitting upstairs as well and will have all the work done for the last Ford show on the 25th October.
Posted by Steve R at 17:21 No comments:

Sierra wiring harness, slimmed down and modified to suit.

535kg with 178 bhp from the motor with the TB's and free flowing exhaust by AAS Newcastle.

Steve R
Durham, United Kingdom
I was an engineer for a local automotive manufacturer. Currently unemployed... The Jago is my 3rd build after a I finished a Sylva Striker about 12 years ago and more recently the MNR Vortx.